Well as promised yesterday here is my part drawn redrawing of Reminiscing which I did on camera (link to video to follow when released), I wanted to create the same standard of work as I would in the studio. I'm pleased with the results, trying to recreate some of the magic I felt in the first attempt. It also gives you an idea of how I go about starting my coloured pencil work, I will post the progression in stages as I finish this over the next week or two.

Day one of my back to work in 2012 and I managed to scan and post this for you as well as edit and print six images ready for my exhibition in Jan. Probably the most productive start to a year yet, I did have a moment though after only an hour and a half I had to lay down for an hour. I blame the shock of going back to work. 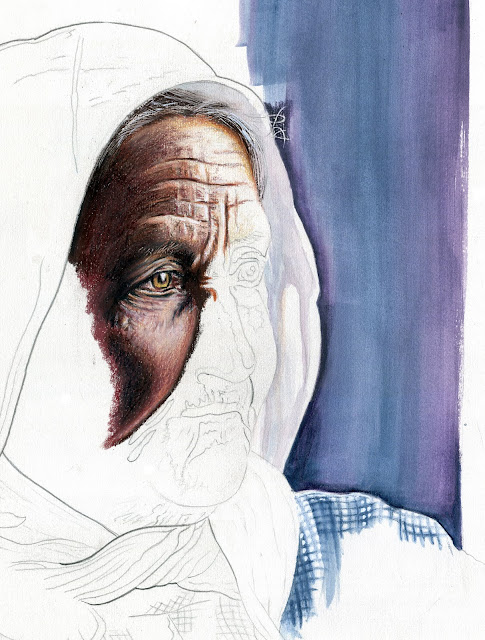 I do struggle with motivating myself and getting the best out of my week. I find my obsessive compulsive disorder helps, it gives me a reason to make lists and write schedules on my white board ( I know I have it bad ) but it does help. Today it said 3hrs drawing and 3hrs printing I did no drawing and 6hrs printing and publishing, so as you can see the system works well.

I tried an experiment last month with the commissions to see what I could get out of a month in actual productive painting. So I wrote down each day how many hours Id done, in November I managed 115hrs in December up to the 20th 53hrs. When you look at it like that it seems shamfull but this was from a standing start. I hadn't produced anything in over twelve months so it gives me a bench mark now to work with. If I can achieve 115hrs a month on projects that aren't my own design this is as bad as it should get, meaning at worst I should create between 12 and 20 originals this year (OCD) averaging 25 hrs a week. That's an important process to remain calm and comfortable and yet productive enough to have a steady stream of work, for me this is a start and I'm happy, I'm working again. Were all abit mad really us artists we all have our little foibles to get us through the week.

Day one back on my site.

Ok so I've been very absent on this website/blog site and its massively out of date with no work of mine for you to view. I have been in...

Stephen Ormerod
I work in a variety of materials these days but started my career using coloured pencils back in 89. I never felt confident enough to us a brush at that time but later realized this was more about myself than skill. I worked alongside Derwent Pencils for 23years as a demonstrator exploring all their new materials and developing new ones, creating images that would later define my style. I enjoy passing on these experiences and techniques to others in the hope they to can enjoy art as I do; By sharing these skills and experiences I also develop personally, helping me clarify the directions I want to pursue. In September 2015 I will be starting a new Journey studying Interactive Arts at Manchester School of Arts.

"It’s difficult to achieve a balance between earning a living and being a fine artist in the true sense, by that I mean creating work that has personal meaning to yourself without any thought of how it will work commercially. I have battled with this problem for many years and never achieved it; I’ve created some technically excellent work and had some recognition but never had the freedom to truly create. I have come to a point now were I would like the opportunity to produce fine artwork that has a relevance that’s not just commercial.

I had the idea to create a business that could support this activity with minimal impact on the creative process. This then developed to create an environment that would allow others like myself to learn skills, share knowledge and show work Storm Art Gallery. The space will be self funding by offering paid facilities to other artists and the general public. It will give myself and others the freedom to persue our ideas without the worry of expensive overheads or poor environment, It’s an important part of the process to have a good environment to work in, this is a fundamental to creating work successfully.

I’m not expecting to just draw and paint all day every day though that would be nice, I intend to give up 24hrs a week to other activities which in tern will pay me my weekly income. This allows me the freedom to work on projects with no worries about financial implications. I have worked as an artist for over 28yrs now and understand what generates the highest most reliable amounts of money, through selecting the higher paid activities that aren’t reliant on art sales but relate to art it’s possible to achieve this. I have developed an art publishing business, workshop activities, teaching and public speaking about my experiences as an alternative supplementary income over my career. I have actual experience of what is possible even in the current financial climate which will be invaluable for this to work.

These activities are also why I thought of this facility, I want to share this experience and skills to allow others to develop there own art practice, which will also fund the space in which it takes place. I know from my own experience that there is a need in every community for such a place that’s why we’re seeing so many of them cropping up all over the . It also needs to be self funding and run as a business to free it from the worries of needing regular funding but at the same time open to that facility.

I’m an artist I love what I do and know how easy it is to loose sight of what its all about, by helping others to achieve there goals I will achieve mine".